From Lola and Pops

Thank You Message from Lola

Lola's update for 2015 from Dave Fitzgerald on Vimeo.

A cure is in sight! New breakthrough this year!

New breakthroughs this year!! Your donation is more important than ever! from Dave Fitzgerald on Vimeo.

BALTIMORE, MD — In new findings published today in the New England Journal of Medicine (Epub ahead of print), researchers from the Kennedy Krieger Institute reveal the discovery of the cause – a genetic mutation that occurs before birth – of Sturge-Weber syndrome (SWS) and port-wine stain birthmarks. SWS is a rare disorder affecting approximately one in 20,000 births, while port-wine birthmarks are more common, affecting approximately one million individuals in the United States.

“This is a complete game changer for those with Sturge-Weber syndrome and the millions born with port-wine birthmarks,” said co-senior study author, Anne Comi, M.D., Director of the Kennedy Krieger Institute’s Hunter Nelson Sturge-Weber Center. “Now that we know the underlying genetic mutation responsible for both conditions, we’re hopeful that we can move quickly towards targeted therapies, offering families the promise of new treatments for the first time.”

Sturge-Weber syndrome is a neurological and skin disorder associated with port-wine birthmarks on the face, glaucoma, seizures, intellectual impairment and weakness on one or both sides of the body. Current treatment options for children with SWS are limited, but include medications to reduce the likelihood of seizures and stroke-like episodes, eye drops and/or surgery to manage glaucoma, and physical rehabilitation.

Port-wine stain birthmarks are caused by abnormally dilated capillaries in the skin, which produce reddish to purplish discoloration. While a facial port-wine birthmark can be associated with SWS, they occur commonly in otherwise healthy individuals. Physicians may perform several painful laser treatments to attempt to remove the port-wine birthmark in infant children, but it often reoccurs.

“This study presents a turning point for research on Sturge-Weber syndrome and port-wine birthmarks,” said Jonathan Pevsner, Ph.D., Director of Bioinformatics at Kennedy Krieger Institute and co-senior study author. “While we suspected that a somatic mutation was the cause for decades now, the technology to test the theory didn’t exist. The advancements in whole genome sequencing and the development of next-generation sequencing tools finally allowed my lab to test and prove the hypothesis.”

Dr. Pevsner’s laboratory found the somatic mutation (a change in DNA that occurs after conception and affects only part of the body) that causes SWS and port-wine birthmarks by performing whole genome sequencing on affected and unaffected tissue and blood samples from three individuals with SWS. They were able to identify one somatic mutation shared by all three affected samples – a nucleotide transition in gene GNAQ on chromosome 9q21. In a separate analysis, the researchers confirmed the finding by detecting the mutation in 23 out of 26 tissue samples from subjects with SWS and 12 out of 13 samples from subjects with isolated port-wine birthmarks. The control samples, and most of the unaffected samples, did not possess the mutation. These analyses also revealed the surprising outcome that the gene involved in SWS is the same gene implicated in uveal melanoma, a type of melanoma that occurs in the eye.

Collaborating with Kennedy Krieger scientists was Douglas Marchuk, Ph.D., and his team at Duke University Medical Center, who further illuminated GNAQ’s role in SWS. Within the body, GNAQ encodes a set of membrane proteins that ensure a set of signaling pathways within the cell are working correctly. However, in both SWS and port-wine stains, a mutation occurs in GNAQ that causes those sets of pathways to increase their activity, ultimately resulting in both conditions.

With the discovery of the gene and pathway involved in SWS and port-wine stains, researchers can now begin investigating drugs that selectively inhibit the implicated pathways. The link to melanoma may also influence research and lead to new directions for the treatment of both conditions in the future.

“As I look back on 25 years of research into Sturge-Weber syndrome, this is a momentous advancement that is thrilling as both an advocate and parent of an affected child,” said Karen Ball, Founder, President and CEO of the Sturge-Weber Foundation.  “This breakthrough gives renewed hope to my family and thousands of others, and brings new opportunities to increase the pace of scientific discovery for Sturge-Weber.”

In revealing that SWS is caused by a somatic mutation, researchers have also confirmed for the first time that Sturge-Weber is not an inherited syndrome – a meaningful insight for many parents. “When a child receives a diagnosis of Sturge-Weber, parents are often filled with questions about whether they passed down the condition to their child,” said Dr. Comi. “We can now definitively put those fears to rest.”

This study was funded by Hunter’s Dream for a Cure Foundation; and the Brain Vascular Malformation Consortium. The Brain Vascular Malformation Consortium (BVMC; U54NS065705) is a part of the National Institutes of Health (NIH) Rare Disease Clinical Research Network (RDCRN), supported through a collaboration between the NIH Office of Rare Diseases Research (ORDR) at the National Center for Advancing Translational Science (NCATS), and the National Institute of Neurological Disorders and Stroke (NINDS).

“It is an honor to know that our funding was instrumental in determining the cause of Sturge-Weber Syndrome,” said Robb and Wendy Nelson, co-founders of Hunter’s Dream for a Cure Foundation, named after their late son who passed away from a SWS-related seizure. “We are grateful to the research team for their monumental advancement that now offers real hope for the development of treatments and early testing that may improve the quality of life for affected children and families.”

About the Kennedy Krieger Institute

Internationally recognized for improving the lives of children and adolescents with disorders and injuries of the brain and spinal cord, the Kennedy Krieger Institute in Baltimore, MD, serves more than 19,000 individuals each year through inpatient and outpatient clinics, home and community services and school-based programs. Kennedy Krieger provides a wide range of services for children with developmental concerns mild to severe, and is home to a team of investigators who are contributing to the understanding of how disorders develop while pioneering new interventions and earlier diagnosis.  For more information on the Kennedy Krieger Institute, visit www.kennedykrieger.org.

To register to play in our golf tournament this year, go to:

A Message from Mitch & Jeanette Ribak – Click the Letter to read 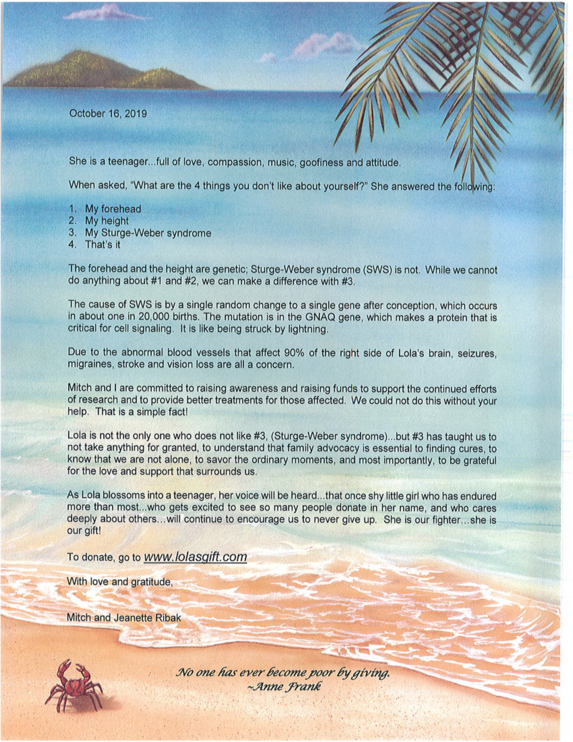 A Song Bite By Lola